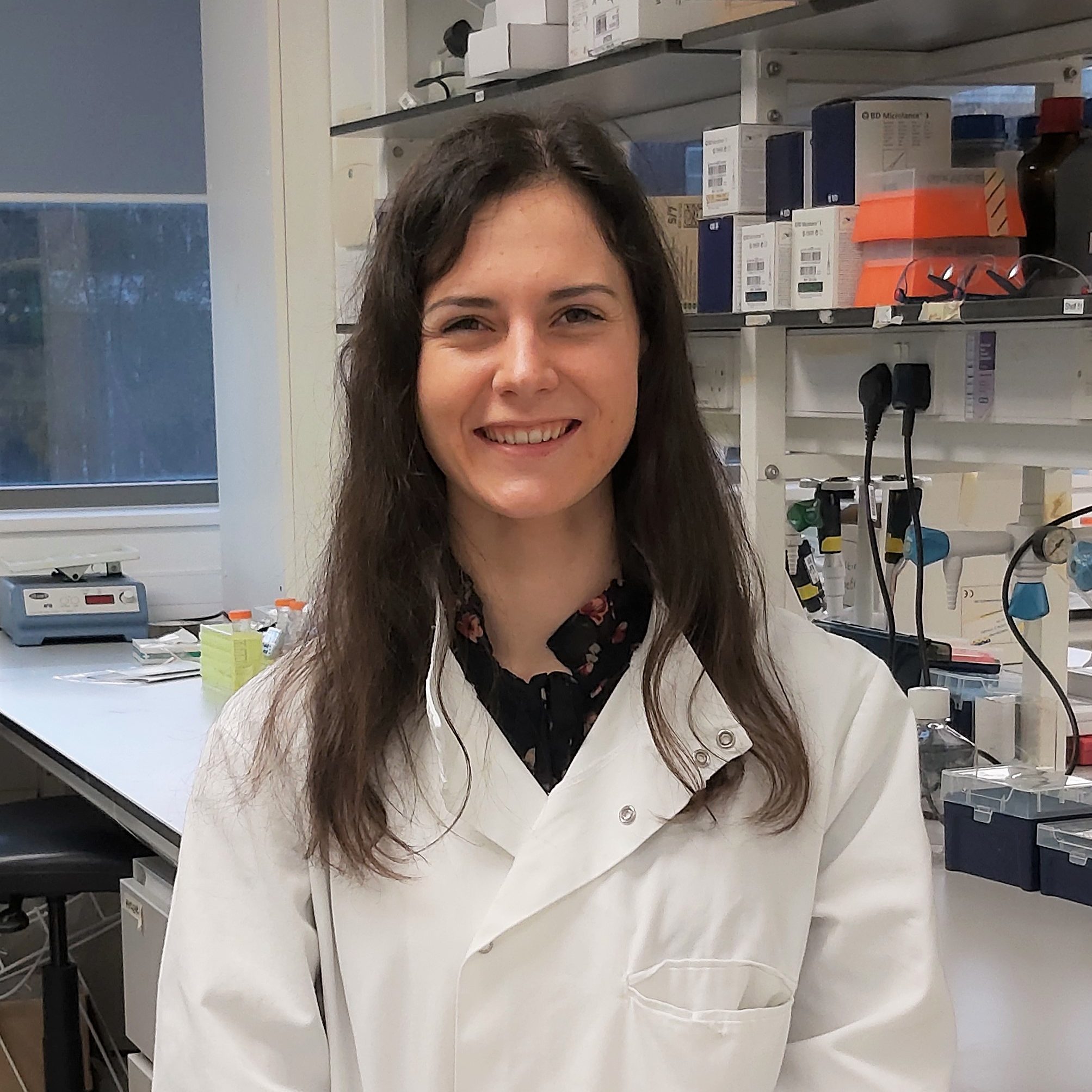 «I have never met a more driven group of individuals than those involved with NF2».

What is your background and how did you come to be involved with NF2 BioSolutions?

My name is Grace Gregory and I am a PhD student at the University of Manchester (UK) working on the underlying mechanisms behind NF2. I come from a drug discovery background where, as a Research Assistant at the University of Oxford, I focussed on developing drugs to reduce the inflammation that occurs within the brain, known as neuroinflammation. However, I was keen to undertake a PhD and wanted to apply my knowledge in inflammation to be used as a drug target in tumours. That was when I found this PhD offered by the University of Manchester funded by NF2 BioSolutions and was delighted to meet this group of wonderfully strong, positive people who are striving to explore and fund therapeutic research for people with NF2.

How is your introduction in the «NF2 world» going?

I have to say, I have never met a more driven group of individuals than those involved with NF2, whether it is the NF2 BioSolutions charity, affected families, fundraisers or the researchers! This moved me to get stuck in straight away in both my research and within the charity where I run the NF2 BioSolutions UK blog and have answered questions from the NF2 community during the NF2 BioSolutions UK webinar. I am even picking up a bit of British Sign Language, although there is lots to learn! I feel very lucky to be a part of this friendly community of people who have introduced me to the NF2 world.

Can you tell us more about your project and what you aim to achieve during your PhD?

Well, my project is aimed at understanding the inflammatory cells within NF2 associated meningiomas that are thought to promote tumour growth, with a view to targeting these inflammatory cells as a potential therapy. Meningiomas are the second most common tumour type that develop in approximately half of those with NF2 and are unaffected by treatment with bevacizumab (Avastin). This leaves surgical intervention as the only viable treatment option for meningiomas and therefore, the aim of my project is to investigate new therapeutic targets and potential drugs for use in the treatment of NF2 associated meningiomas. I have also been fortunate enough to start my PhD alongside another student, Adam Paul Jones, who is working on the inflammatory cells within vestibular schwannomas, the hallmark tumour type of NF2. This means we can both work in parallel on vestibular schwannomas and meningiomas with the hope that we will determine a therapy able to act on both tumour types.

After reviewing the studies on meningiomas that have already been carried out, have you already focused on which drugs may be promising to test their efficacy in the laboratory?

As this project is still young, we are first aiming to understand the inflammation happening in these tumours and then we can seek drugs that specifically target a promising mechanism. After reviewing the current literature, we have become increasingly interested in a specific type of immune cells, known as macrophages that are well known to invade tumours and increase the tumour growth in a variety of conditions. Macrophages are present in both vestibular schwannomas and meningiomas and by reducing macrophages in the tumours, the tumours also had reduced growth. Therefore, this may be a very promising avenue to target with drugs that have already been approved for other conditions.

To look at these immune cells in more detail, we are going to use high resolution microscopy to look at NF2 samples and identify the amount and types of cells that are found within the tumours. We will also combine this with experiments in cell lines made from NF2 tumours that can be grown in the lab in combination with macrophages to see how they interact and respond to specific drugs. Finally, we are also looking to recruit people in the UK with NF2 for a study to look for signs of tumour-

After the latest advanced results from INTUIT, do you think that brigatinib can be an effective drug for this type of tumor?

As brigatinib was highlighted in preclinical studies as a potential drug for NF2 from a library of almost 2,000 compounds and found to be effective at reducing tumour growth in NF2 mouse models, it shows promise as an NF2 treatment. It works by inhibiting receptors that drive the out-of-control growth occurring in the cells of both schwannomas and meningiomas in NF2-associated tumours. Therefore, brigatinib does have the potential to be an effective therapeutic for meningiomas, however it is not yet licenced or available as a drug for NF2.

Additionally, there are other clinical trials underway such as the histone deacetylase (HDAC) inhibitor trial in the UK which is planned to start in late 2022, which is already FDA approved and has been shown to be effective for both vestibular schwannomas and meningioma in preclinical studies. Therefore, I am eagerly waiting to know the results of the INTUIT trial for brigatinib, as well as keeping an eye on the other therapeutic options that may be the future of NF2 treatments and the first to treat NF2-associated meningioma.

In AMANDOS we see the change of name of NF2 as useful, we bet on MERLIN, what do you think about this topic?

This is an interesting question because I agree the name Neurofibromatosis Type 2 does not suit the condition, as those with NF2 do not develop neurofibroma tumours with the dominant tumour type being schwannomas instead. However, the name of the mutated gene that produces the dysfunctional merlin protein in people with NF2 is called the NF2 gene, which is rigid within the literature and therefore is likely to remain for the gene itself. With this in mind, as discussed in the NF2 BioSolutions UK webinar with Professor Gareth Evans, although the NF2 gene name is likely to stay, the condition itself may shift to be known as something more descriptive of its character, such as NF2-related schwannomatosis.

And finally, tell us what you are like outside the lab…

Both inside and outside the lab I am willing to give everything a go, no matter how strange! I have had a few odd hobbies, for example I lived on a canal in a narrowboat while I worked in Oxford, I had a pet axolotl from Mexico, I am doing a skydive next month and I was part of a successful Guinness World Record for the most people stretching sweets at the same time… which is still unbroken even after 15 years!

If you would like to hear more about my research, plans or thoughts (or maybe even about my strange hobbies) then please email me at grace@nf2biosolutions.org and check out my blog on the NF2 BioSolutions website.